Mesothelioma Legacy of 9/11 and the World Trade Centre

Nearly 15 years after the devastating terrorist attacks in New York, many survivors of the tragedy are facing an uncertain future following a rise in asbestos related illnesses.

Builders constructed the World Trade Centre using about 400 tons of asbestos in the structure’s insulation, drywall, fireproofing materials and steel because of the mineral’s heat resistance and affordability. The 9/11 terrorist attacks released the deadly toxin in a dust cloud across Manhattan. 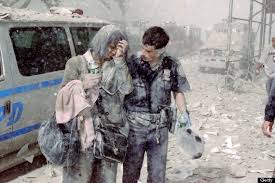 When the Twin Towers collapsed to the ground on September 11, 2001, a massive cloud of smoke, dust and debris released hazardous asbestos fibres and other toxic substances into the air. Asbestos fireproofing materials from 20 stories of the towers came showering down on New York City.

The World Trade Centre Health Registry estimates about 410,000 people were exposed to a host of toxins including asbestos during the rescue, recovery and clean-up efforts that followed 9/11. People most affected by asbestos at Ground Zero were people assigned to rescue survivors. These workers were among the first on the scene and the last to leave the wreckage. Search and rescue workers and others responsible for cleaning up the debris in the months after the towers collapsed were also exposed to asbestos.

Health Concerns of Asbestos Use in Building the Twin Towers

This toxic substance raised health concerns even as construction of the towers began in 1966. When construction of the North Tower was well underway in 1971, the World Trade Centre builders halted the use of asbestos because a ban on the material was expected in the near future. But by this time many asbestos-containing products had already been incorporated into both towers.

Asbestos Health Concerns After the Attack

These asbestos products did not pose a health concern until 9/11, when asbestos fireproofing materials from 20 stories of the towers came showering down on New York City. According to reports from the U.S. Environmental Protection Agency (EPA), the implosion of the towers “pulverized asbestos to ultra-fine particles” and scattered the debris over Lower Manhattan.

Exposure to asbestos can cause life-threatening illnesses such as mesothelioma and asbestosis. These diseases normally take between 20 and 50 years to display symptoms. But in 2006 – five years after inhaling the toxic debris from Ground Zero – an emergency responder from 9/11 died of mesothelioma. Another worker, 41-year-old Deborah Reeve, developed a serious cough just two years after the attacks and died of mesothelioma in 2004.

Experts expect a larger number of 9/11 responders to be diagnosed with these illnesses in the upcoming years. That’s because many of these first responders and workers who assisted in the clean-up and recovery were ill-prepared to face the airborne contaminants, and few were given adequate respiratory protection in the months after 9/11.

According to a report from a Hopkins University study, even workers who joined the clean-up process by January 2002 developed “significant respiratory health problems.”

As of September 2009, the organization 9-11 Health Now reported that 817 World Trade Centre workers had died from various causes. About 40,000 were enrolled in medical monitoring and 20,000 were “sick and under treatment.” Many had upper respiratory issues, while some reported multiple medical concerns. A number of these people are receiving help from designated World Trade Centre programs at facilities such as Mount Sinai Medical Centre.